The term ‘kung fu’ (or ‘gung fu’) literally means ‘achievement through great effort’ but is also taken to be the name of a group of Chinese martial arts which typically feature sharp blows and kicks. The term ‘kung’ means something like achievement or merit, and ‘fu’ can be translated into man. Many people are under the impression that Kung Fu originated with the Shaolin Temple. It did not. Read on to get the details.

History of Kung Fu
Although many people believe that the Chinese martial arts originated at the Shaolin Temple there is some evidence to suggest that the Chinese martial arts were well developed before the Shaolin Temple was built. The temple was built in the third century A.D. but there are references to such individuals as the physician Hwa Tuo who was using exercises based on animal movements to improve the physical health of his patients well before that date. Hwa Tuo lived at the time of the Three Kingdom, around A.D. 220-65. Hwa Tuo is said to have created a set of exercises based upon five animals: the tiger, bear, monkey, stork and dear. The reason this is significant is that there is even today a strong relationship between animal movement and the Chinese martial arts. 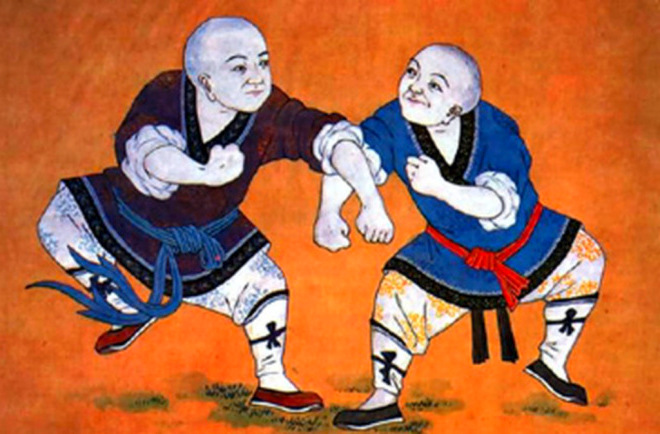 In fact the Shaolin temple did become a centre of development for the martial arts and remained so for more than a thousand years before it was dissolved by the Ching Dynasty in the Eighteenth Century. As a side note the Shaolin Temple is situated at the foot of the ‘Songshan’ mountain in Dengfeng County, Honan Province. It should also be said that there have been many Shaolin Temples built all around China. Whether these were set up as competitors to the temple at Songshan or represented an extension of the original Shaolin Temple is not known.

Da Mo
In the year 527 AD, a monk known as Da Mo (Bodhidharma) arrived at the Shaolin Temple. Dat Mo is belived to have been an Indian monk who was probably born in Kanchipuram near Madras. Da Mo travelled to the city of Kuang, now known as Canton, where he was granted an audience with the Emperor at the time, Wu Ti of the Liang Dynasty. The Emperor had instructed local Buddhist monks to translate Buddhist texts from Sanskrit to Chinese with the intention that the general populace would then have the ability to practice the Buddhist religion. After his audience with the Emperor, Dat Mo travelled to a monastery in the Kingdom of Wei before finally arriving at the Shaolin temple. When Da Mo initially arrived at Shaolin, he was refused admittance, perhaps because he was considered a foreigner. Rejected by the monks, Da Mo went to a nearby cave and meditated by staring at the cave wall for nine years until the monks recognized his religious prowess and admitted him. Legend has it that he bored a hole through one side of the cave with his constant gaze. Unfortunately, the real reason that Da Mo earned his recognition from the Shaolin monks is lost to history. There is also a story that a local monk was so moved by Dat Mo’s piety that he cut off one of his hands in symaphy. Once admitted to the temple it is believed that Dat Mo found his Chinese disciples too weak, both physically and mentally, to practice the intensive meditation required by his path to enlightenment. Dat Mo is regarded as the founder of Chan Buddhism which is probably better known by its Japanese derivative, Zen Buddhism.

The Shaolin Temple
To rectify monks’ fitness problem, Dat Mo devised exercises combining physical movement and breathing, thus strengthening the bodies and minds of his disciples. This enabled them to pursue the spiritual path with more vigor. Since Dat Mo was himself of the warrior Caste (Ksatriva) it is possible some of the exercises were drawn from the Indian martial tradition. It is evident, therefore that early Shaolin Kung Fu was largely internal in nature, being designed for the improvement of health, control of the mind and the perception of the Buddha nature. The content of this training has come down to the present time as:

The Chinese martial arts, and indeed all the martial arts that followed, appear to be the result of a cross-fertilisation between India and China and the passage of people between the two counties. Monks and merchants were constantly making the journey and it is not unreasonable to assume that they required trained body guards or even to learn to defend themselves. Combined with Dat Mo’s intervention at the Shaolin Temple this has lead to what we call Kung Fu today. Lau Gar is a form of Kung Fu and as such can also trace its roots to the Shaolin Temple.